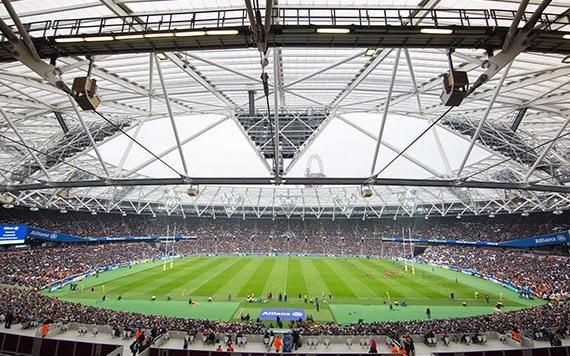 Saracensâ€™ Head of Rugby Mark McCall hailed his sideâ€™s reaction in the second half to comeback and defeat Harlequins at London Stadium on Saturday, 27-20.

McCallâ€™s men were 17-6 down at half-time, but two tries from Will Skelton and the boot of Alex Lozowski turned things around for the Premiership champions.

A mis-timed kick from Lozowski with a second left of the first-half clock, gifted Quins an opportunity from which Danny Care scored a try to put them 17-6 ahead. McCall said they responded well to this â€˜curve-ballâ€™.

â€œThe players were really calm and clear at half-time about what we needed to do better,â€ said McCall.

â€œThere was a big curve ball just before half-time when they scored that try to make it 17-6, but the reaction of the team in the second-half was fantastic.

â€œThe second half is going to provide us with a bit of feel-good to take into the Glasgow game, the first half some soul searching as to what we need to do better.â€

After a fairly tepid first half, the second period was frantic as 42,717 fans packed into London Stadium tried to keep up with the incidents, including when referee JP Doyle was in the path of a bulldozing Billy Vunipola.

Vunipola stormed past Doyle and a hesitant Chris Robshaw to go over the line, but after consulting with the TMO, Doyle disallowed the try as he felt Robshawâ€™s path was obstructed. David Strettle also had a try chalked off as the referee decided a scuffle between Care and Liam Williams disrupted play.

â€œI don't know what happened with the clock just before half-time, but I thought Billy's try was a try. JP Doyle doesn't disrupt Chris Robshaw at all,â€ explained McCall.

"And I don't really know why David Strettle's try was disallowed. It doesn't matter in some respects because we took charge and scored right away."

Man-of-the-match Skelton inspired the Saracens revival in the second half with two well taken tries. The Australian is two stone lighter this season with McCall saying heâ€™s had a dedicated diet and fitness regime, he hailed him for his second half showing.

â€œThat's the longest game Will has played for us,â€ said the coach.

â€œHe played for 73 minutes. He was magnificent and it was almost as if he's decided that he would be the difference in the second half.â€

The win for Saracens had taken them four points off leaders Exeter Chiefs in the Gallagher Premiership, however Exeter beat Bath to move their advantage to nine points at the top.

The focus will be moving to European competition for Saracens though, when they face Glasgow in their Heineken Cup quarter-final next weekend. Star-men Maro Itoje and Owen Farrell are expected to return to action for this crucial tie.