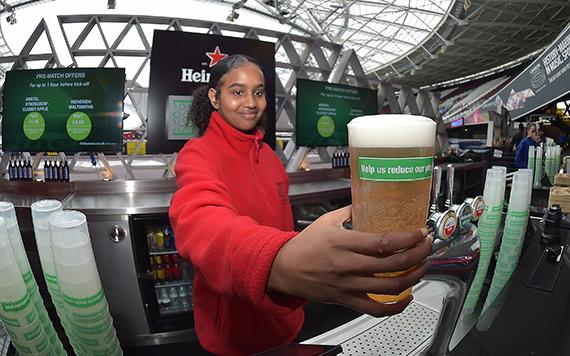 After a chance to breathe during the international break, West Ham United return home to London Stadium this weekend to face Everton in Saturday's late kickoff (5:30pm).

In their last league outing, theer Hammers recorded a remarkable comeback victory over relegation-threatened Huddersfield Town, scoring twice in the last ten minutes to seal a 4-3 victory at the Stadium.

Everton lie two places below ninth-placed West Ham, but both sides will have designs on seventh in the Premier League, with the competition reaching its closing stages.

At this fixture, we're teaming up with the Premier League and Sky Ocean Rescue alongside West Ham United to trial the use of reuable cups for draught beer served inside London Stadium. We'd like to encourage all fans to keep an eye out for our cup collectors around the concourse, and help to #PassonPlastic.

There's more information below, and a dedicated news article here...

London Stadium and West Ham United are continuingÂ this trial in conjunction with the Premier League and Sky Ocean Rescue to inspire football fans to #passonplastic at the remaining home games this season.
Â
The first game of the trial, against Huddersfield Town, was a success, with over 20,000 reusable plastic cups returned, so that they can be washed and reused.
Â
#passonplastic is designed to raise awareness of the environmental problems caused by plastic usage and inspire fans to reduce their use of single use plastics in everyday life.
Â
Supporters can keep driving the campaign by dropping their reusable plastic beer cups at the green collection points that are on the concourse and in hospitality, not in normal bins, in an effort to maximise the number of plastic cups can be saved by the end of the season.
Â
The Stadium has 100 green cup collections points around the Stadium â€“ at least one per block â€“ with dedicated cup collectors wearing green â€˜Cup Collection Squadâ€™ t-shirts to help ensure all the reusable cups are collected.Â
Â
The results of the trial will be reviewed at the end of the season before any decisions are made on implementing the scheme on a permanent basis.
Â

Kickoff between West Ham United and Everton is set for 5.30pm, with London Stadium opening the turnstiles for supporters 90 minutes ahead of the match, at 4pm.

Supporters can take advantage of early access drinks discounts inside London Stadium ahead of this match, with deals available for the first half hour until 4:30pm.Â