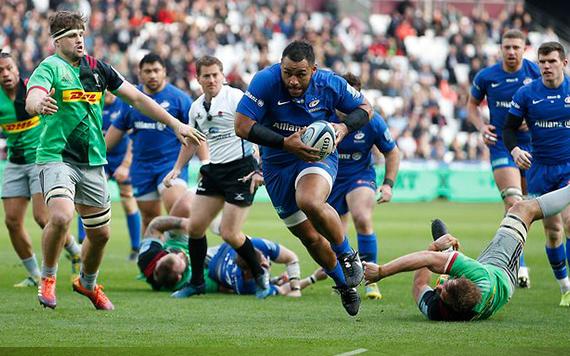 Saracens edged a thrilling local derby with Harlequins at London Stadium, 27-20, closing the gap to leaders Exeter Chiefs to four points, at the top of the Gallagher Premiership.

A brace of tries from Will Skelton capped an impressive second-half fightback, along with 12 points from the boot of Alex Lozowski. First-half tries from Marcus Smith and Danny Care had put Harlequins 17-6 in front at half-time, but Saracens were relentless in the second half.

Fireworks, flames and flags greeted Saracens as they headed out onto the London Stadium turf.

Harlequins lost last yearâ€™s derby 24-11 here, they were out for revenge and to close the gap on their rivals who are in second, the visitors were 10 points back in third.

It was a tense start from both in front of 42,717 spectators, with both putting together neat passages of play only to fall to handling errors in key areas.

Harlequins edged in front on 11 minutes, fly-half Marcus Smith kicking a penalty in after a foul by Schalk Burger at the ruck. It couldâ€™ve been more just a few minutes later, but David Strettle was able to halt the run of Joe Marchant down the left.

Saracens took time to get control of the ball. Alex Goode got his side going with a darting run down the left wing, evading defenders. When the ball was recycled Goode was trying to free Maitland, but his pass was just too quick.

It was Paul Gustardâ€™s side who were the more dangerous and but for Strettle may well have been clear in-front. A clever break from Mike Brown took the ball towards the Saracens goal, he found Marchant, who moved it onto Ross Chisholm. Then out of nowhere, Strettle was there to bring the winger down 20 metres out.

The opening try came on 32 minutes for Harlequins, via the clever feet of Marcus Smith. Ben Tapuai found his number 10, who glided round the lunging tackle of Lozowski to go over.

Lozowski scored 14 points in this fixture last year and was the points-scorer in the first half for the hosts today. Two penalties put through the posts, the second after Matt Symons illegally stopped Jamie George from going over, he was sin-binned.

Yet, a crucial slip of concentration from Lozowski allowed Harlequins to add to their tally. Collecting the ball inside the try area, he kicked the ball out in the last second of the half, meaning the visitors were able to have a line-out.

Danny Care profited as he picked and carried the ball past opposing number Ben Spencer to give his team a healthy lead at the break. Smith converted both times to make the score 17-6.

The second-half started frantically, as Mark McCallâ€™s team came out firing. It couldâ€™ve been two tries in seven minutes, but it proved to be just one.

Vunipola collected Spencerâ€™s pass from the ruck and barged through referee JP Doyle and Chris Robshaw to reach the line. After consulting with the TMO, Doyle believed Robshaw had to change his line due to the obstruction of the referee.

In the 47th minute, Schalk Burger did deliver a try for Saracens following relentless attacks. Collecting from close-range, he was backed up by Jackson Wray and Vunipola to go over the line. Lozowski converted to cut the score to 13-17.

Saracens were in top gear now and Harlequins were conceding penalty after penalty, four in seven second-half minutes. Jamie George and Sean Maitland were close to going over on the left, so Saracens moved to the right and did get over the line.

Strettle showed his attacking qualities to side-step his defender and go over, however his team were to rue another TMO call that disallowed a try of theirs.

A scuffle between Liam Williams and Danny Care was happening on the opposite side of the pitch as play was carrying on, this was said to have interfered with play and so the try was not given. Both were sin-binned, with the score 13-17.

In the 58th minute, there was no controversy about this try for Saracens. Will Skelton carried the ball over from close range as his team deservedly led after a dominant second-half up to this point, Lozowskiâ€™s kick meant the score was now 20-17.

The game continued to sway back-and-forth, the scores were returned to all-square. A deliberate knock-on from Skelton gave Smith a chance to kick from just past half-way, he found the mark to level at 20-20. That was his 49th successful kick out of 59 this season.

Into the final 15 minutes, Saracens were not letting off from constant second half pressure and it proved too much for Harlequins again. Nathan Earle failed to recover the ball from Goodeâ€™s grubber, gifting Saracens possession in front of the line.

Man-of-the-match Skelton powered over for his second try to put the hosts in front once more in this dramatic derby match. A fifth kick out of five from Lozowski put Saracens 27-20 in front, after being 17-6 behind at half-time.

Saracens win puts them 13 points ahead of rivals Harlequins in second in the Gallagher Premiership table.