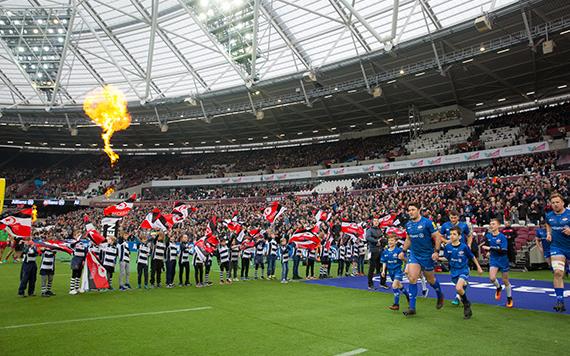 It is a meeting of local rivals once again at London Stadium this year, as Saracens take on Harlequins in this Gallagher Premiership Rugby clash.

Saracens are second in the table, chasing leaders Exeter Chiefs who are eight points clear, whilst Harlequins are just a place behind in third. Itâ€™s must-win for both.

It was Mark McCallâ€™s side that were victors when they played at The Stoop in January, 32-12, but they have lost three of their last four games.

Englandâ€™s Ben Spencer was called-up to feature in a thrilling draw with Scotland last weekend, but is back for his club along with many Six Nations stars, and believes theyâ€™re â€˜raring to goâ€™.

â€œWhether itâ€™s summer tour, autumn internationals or Six Nations, the boys always come back in raring to go and ready to put the shirt on again,â€ said Spencer.

â€œWhen theyâ€™re away the boys fight for their lives. The returning lads see all the hard work everyone is putting in while theyâ€™re in camp and they want to come back and take the team to a new level.â€

As for the visitors, Harlequins have lost just one in their last six and are eyeing to claw back the 10-point-gap between themselves and Saracens. Scrum-half Charlie Mulchrone believes his club is in good form.

â€œWeâ€™re going pretty well at the moment, third in the league and we won five on the bounce before we lost against Gloucester and obviously that was a bit of a pasting,â€ said Mulchrone.

â€œIt was possibly the wake-up call we needed and we have a tough game next weekend against Saracens that we need to prepare well for.â€

Into the team news, Grand Slam winner Liam Williams is back in a Saracens shirt to start, as well as Englandâ€™s Billy Vunipola, Jamie George and Alex Goode. Scotlandâ€™s winger Sean Maitland makes the cut and captain Brad Barrit has overcome a knock to partner Alex Lozowski, who starred in this fixture last season, at centre.

Kyle Sinckler and Joe Marler are back in the front row for Quins, who make five changes. Danny Care is back from a rib injury to start in scrum-half, Marcus Smith is in at fly-half.

Kick-off is at 3:00 at London Stadium on Saturday.