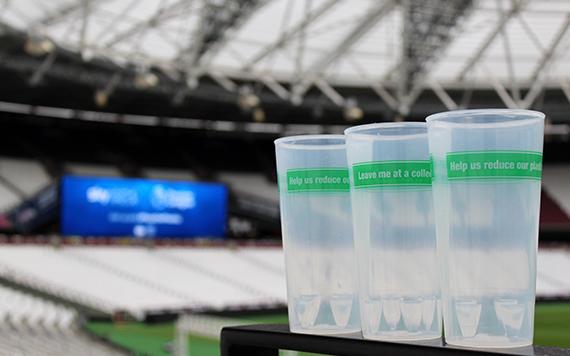 The Hammers have proved a dominant force at home of late, unbeaten at the Queen Elizabeth Olympic Park venue since the turn of the year. They are also expected to be boosted by the return of Marko Arnautovic to the starting XI.Â

In contrast, Huddersfield Town are fighting for Premier League survival but have been goal-shy on the road, filing to score in their last five league outings away from home.

Starting with this fixture, we're teaming up with the Premier League and Sky Ocean Rescue alongside West Ham United to trial the use of reuable cups for draught beer served inside London Stadium. We'd like to encourage all fans to keep an eye out for our cup collectors around the concourse, and help to #PassonPlastic.

There's more information below, and a dedicated news article here...

London Stadium, working in conjunction with West Ham United, are running a trial in conjunction with the Premier League and Sky Ocean Rescue to inspire football fans to #passonplastic at the remaining home games this season.
Â
Starting with this fixture, the trial will see all draught beer served across general admission areas at the venue in reusable plastic cups at no additional cost to fans.
Â
Fans can do their part on matchday by dropping their reusable plastic beer cups at the green collection points that will be on the concourse and in hospitality. These cups should not be put in regular bins around the Stadium.Â
Â
Fans will see 100 green cup collections points around the Stadium â€“ at least one per block â€“ with dedicated cup collectors wearing green â€˜Cup Collection Squadâ€™ t-shirts to help ensure all the reusable cups are collected.Â
Â

Kickoff between West Ham United and Huddersfield Town is set for 3pm, with London Stadium opening the turnstiles for supporters 90 minutes ahead of the match, at 1.30pm.

Supporters can take advantage of early access drinks discounts inside London Stadium ahead of this match, with deals available for the first half hour until 2pm.Â

Hospitality guests for the fixture can enjoy entry to London Stadium via Entrance B on Podium level from 12:30pm.