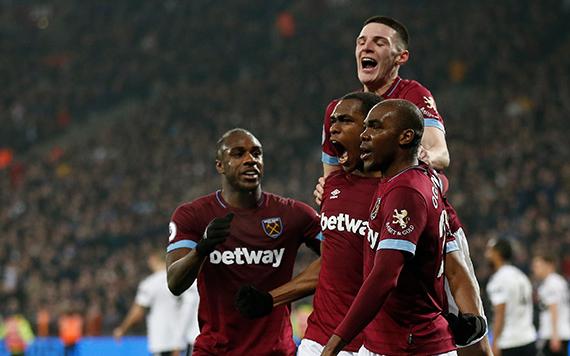 A late Michail Antonio header sealed a 3-1 win for West Ham over London rivals Fulham on Friday night at London Stadium, completing a double over the West London side.

Ryan Babel got the away side off to a dream start inside three minutes, but first half headers from Chicharito and Issa Diop turned the score in West Hamâ€™s favour before Antonio made it a hat-trick of headers for the Hammers.

A Friday night derby at London Stadium, Fulham making their first ever visit to London Stadium after promotion via the play-offs last season.

The big news for West Ham ahead of kick-off was Manuel Lanziniâ€™s long, awaited return to the squad, making the substitute bench alongside Marko Arnautovic and Samir Nasri.

Fulham gave former Arsenal and Borussia Monchengladbach defender Havard Nordtveit his debut with Tom Cairney into captain the side.

The visitors made the better start, Ryan Babel having an opening inside 40 seconds after he intercepted Pablo Zabaletaâ€™s pass but Lukasz Fabianski stood tall to save.

But, just two minutes later the Dutchman didnâ€™t miss. England U21 star Ryan Sessegnon crossed from the left and Babel scored from close range, his first Premier League goal in exactly 3,000 days, when he was at Liverpool.

After a shock to the system with the energetic opening from Fulham, West Ham grew into the game and continuously utilised the overlaps of Pablo Zabaleta and Aaron Cresswell.

This was creating crossing opportunities, which led to corners for the hosts and thatâ€™s where they were having their best chance at levelling the score.

Robert Snodgrass has a brilliant left foot and every time he delivered, Fulham looked in danger. Diop headed a ball back across to the near post, but Antonio just couldnâ€™t reach far enough to turn it home.

The pressure told on 30 minutes, unsurprisingly from a Snodgrass set piece. Sergio Rico punched unconvincingly into the air, Angelo Ogbonna was first to the second ball, Diop flicked it on and there was Chicharito on the post to get the telling touch.

Just 10 minutes later the comeback was complete, the Scotsman earned an assist when Diop towered above his marker to put West Ham in front, his first Premier League goal.

Ogbonna nearly matched his centre back partnerâ€™s strike with a header of his own, but Rico parried over at the near post.

Former Fulham man Ryan Fredericks was introduced at half-time as Fulham were now trying to turn the score around in the second half.

They threatened on 56 minutes, Aleksander Mitrovic whoâ€™d been well marshalled by the West Ham defence thus far, took down Calum Chambersâ€™ pass and found Babel who stung the hands of Fabianski from long-range.

The visitors were involving their number nine more as the game wore on. Neat football through the lines reached Cairney, who played through Mitrovic but Fredericks was back in time to deny his former employers an equaliser with a superb tackle.

There was a touching moment on 76 minutes as Lanzini, returned to first-team action to a standing ovation, for the first time since his brace on the final day of last campaign against Everton.

It was another substitute, Arnautovic who came close to wrapping up the win. Lanzini drifted into the box, teed up Snodgrass and he crossed to the Austrian who hit the post with a header.

The home faithful were desperate for the Argentinian to score, but in the end Arnautovic was the man coming close to scoring a third. Collecting a clever pass from Noble on the right side of the penalty box, his rasping shot was brilliantly tipped onto the post by Rico.

Then just as injury time started, the forward provided the assist for Antonio to seal a well-deserved West Ham win. Heading in off the post from the penalty spot to relieve and nerves of home fans.

Thatâ€™s five points in three games for the Hammers as they close the gap on eighth place Wolves to three points, Newcastle are next at London Stadium next month.