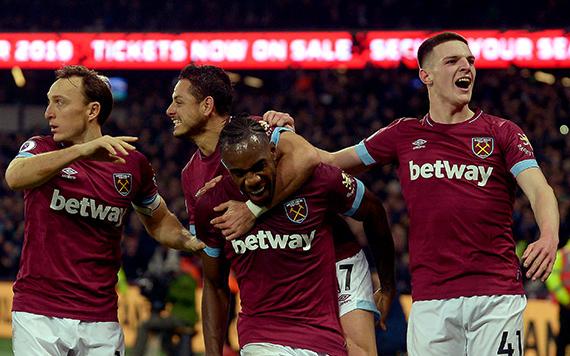 West Ham continued their run of good results against the leagueâ€™s top teams with a 1-1 draw against title-chasing Liverpool at London Stadium.

The Hammers, who had beaten Manchester United and Arsenal earlier in the season at the Queen Elizabeth Olympic Park venue, were industrious and good value for their point. Michail Antonioâ€™s leveller was the first halfâ€™s standout moment, while Declan Rice and Felipe Anderson impressed once again.

West Ham made three changes for their home return. With Marko Arnautovic absent, Javier Hernandez led the line, and threatened first - his snapshot from the edge of the penalty area whistling narrowly wide. He then drew a good save from Alisson with a second well-struck effort shorlty after Aaron Cresswell had a sight of goal.

Despite the home sideâ€™s early pressure, it was the visitors who took the lead.

Adam Lallana on his return to the Liverpool team, was creator. He danced and threaded a beautiful ball for James Milner - who looked to be offside. He found Mane, who tucked home past Fabianski against the run of play.

If there had been an element of injustice to the opener, there was nothing of the sort in West Hamâ€™s equaliser. A picture-perfect training ground routine saw a free kick played in to Michail Antonio. He turned his man and placed his shot perfectly off the inside of the far post.Â

The Hammers should have led, too. Ten minutes later, Felipe Anderson whipped in a wicked delivery into the Liverpool penalty area. Declan Rice met it with a well-timed run but his powerful header flew narrowly over the bar.

After the break West Ham threatened from set-pieces again. Issa Diop met an inswinging corner, but could only flick his header wide.

Open during the seconf half - couple of half chances for Liverpool, before a good, inclisive move could have seen West Ham take the lead. After moving the ball quickly and with purpose, Hernandez and Robert Snodgrass impeded one another and the chance went away.

Mark Noble was the next to come close - Robert Snodgrass did brilliantly to keep the ball in play inside the byline, but the West Ham captain could only strike over the bar.

The gameâ€™s pace slowed following the introduction of Andy Carroll, while fellow substitute Pedro Obiang was effective in breaking up play in the midfield during the closing stages, and despite a half chance to win the game, West Ham finished level with the title contenders in another accomplished, industrious home performance.