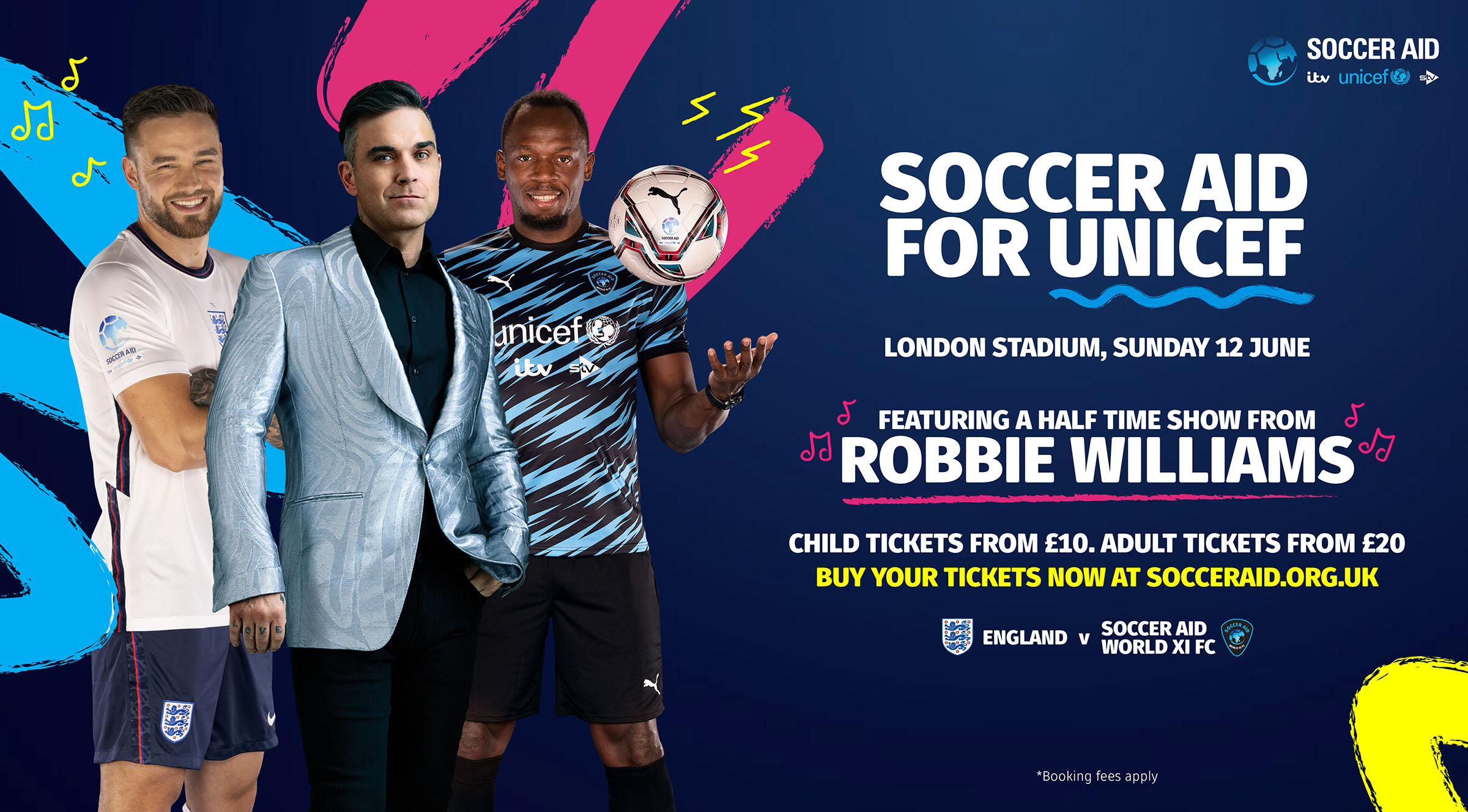 Soccer Aid for UNICEF returns to London this summer on Sunday 12 June at the London Stadium and will feature a special half time show from Mr Soccer Aid himself, UNICEF UK Ambassador Robbie Williams.

Celebrity favourites Tom Grennan, Chunkz and Martin Compston will lace up their boots once again to play alongside footballing legends Gary Neville, Jamie Carragher, Fara Williams and Patrice Evra. Usain Bolt makes his return as captain of the Soccer Aid World XI team, competing at the London Stadium ten years on from his gold medal heroics at London 2012.

Taking to the pitch for the first time in the world’s biggest celebrity charity football match, new signings for 2022 include former One Direction singer Liam Payne as captain of the England team. He will be joined by Emily in Paris star Lucien Laviscount, and comedians Russell Howard and Alex Brooker – who will become the first-ever physically disabled participant to take part in the game.

Off-pitch, UNICEF UK Ambassador Dermot O’Leary returns as presenter joined by Maya Jama providing her thoughts as a pundit. Bringing you the action up-close, Alex Scott will be returning as our pitch-side reporter.

Tickets are on sale now with prices starting from £10 for children, £20 for adults and premium from £75. A family of four (2 adults, 2 children) can go from £60. Booking fees apply.

How your support helps children around the world

Childhood should be one endless playtime. But right now, kids are facing conflict, disasters, and other crises in countries around the world. And it is children that are often hardest hit – like the 7.5 million children currently affected by the rapidly escalating conflict in Ukraine. They risk losing their homes, their families, and their schools. They lose the ability to just be kids.

The money raised from this year’s game could help UNICEF provide vaccines, fight malnutrition, and provide safe spaces to protect children in times of crisis, helping kids get back to the childhoods they are entitled to.

So if you believe in play-filled childhoods, join Soccer Aid for UNICEF. Nothing beats watching the big game live so buy your tickets now and get up close to the action!