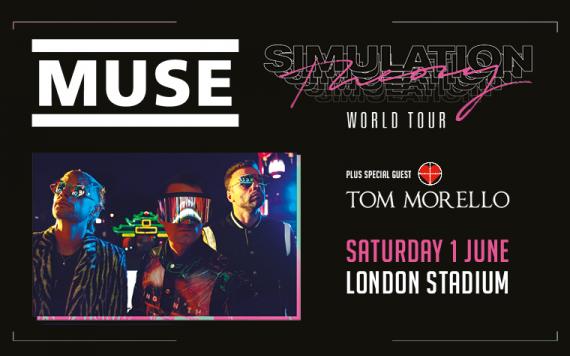 Today the band have announced that they will be joined by very special guest, guitar legend and co-founder of Rage Against The Machine, Audioslave and Prophets Of Rage Tom Morello on their UK dates, beginning with a massive show at London Stadium on Saturday 1 June.

Limited tickets for the show remain on sale here...

Tom Morello is living proof of the transformative power of rockâ€™nâ€™roll and released his latest collaborative album â€˜The Atlas Undergroundâ€™ last October. The album marked Morelloâ€™s most ambitious artistic effort of his storied career and left critics raving with Rolling Stone praising, â€œA rap-rock/EDM throwdownâ€¦ and the results are explosive,â€ LA Weekly lauds, â€œa cohesive piece of work that sounds fresh and new." Following his own headline tour in May he will join the band on all three of their UK shows this June.

Muse has been heralded around the world for their incendiary and groundbreaking live shows and thus far this tour has be no exception:

â€œInsanely colorful, futuristic â€¦â€¦. A visual and musical feast, the tour finds the band yet again pushing their stage production to greater heightsâ€

â€œBlending urgency and precision to reveal the symbiotic relationship between their musical performance and stage production. The band played into the show; the show, into the bandâ€ - Houston Press Feb 23, 2019

â€œThe sights, sounds, fears and hopes that rock music in all of its forms can offer was brought vividly to the forefront in an unavoidably bright and mesmerizing presentation.â€ Dallas Morning News, February 25, 2019

â€œA jaw dropping extravaganza.. An evening that sets new standards for the possibilities of arena rock.â€ - The Independent (UK)

â€œThrilling, theatrical and technically flawless, this was stadium rock of the highest quality from Muse, masters of musical destruction.â€ - The Standard (UK)

Don't miss the chance to be part of the rock spectacle of this summer, and secure your seats to Muse at London Stadium now...